There are eight American Indian tribes that own casinos in Oregon. These casinos are built and operated under the Indian Gaming Regulatory Act enacted by the U.S. Congress in 1988. The law created the National Indian Gaming Commission (NIGC) to regulate Indian gaming in Oregon.

Oregon tribes reopen their casinos June 1, 2020 - Oregon tribes reopened six casinos in May and will open another two in the first week of June. Only one casino has no plans to reopen at this time, however an announcement is expected soon. ... Read more

The Mill Casino reopens today May 18 May 18, 2020 - The Mill Casino celebrated a Grand Reopening today with limited hours, a reconfigured gaming floor and a "Safe Play Plan" to protect guests and workers against the spread of COVID-19. ... Read more

The Gaming Division of the Oregon State Police has approved the following list of casino games for Oregon's tribal casinos. Each casino offers some or all of the games on the list.

Click on any of the Oregon counties on the map below to find local casino information, or scroll below the map to search an alphabetical listing of counties and their casinos. 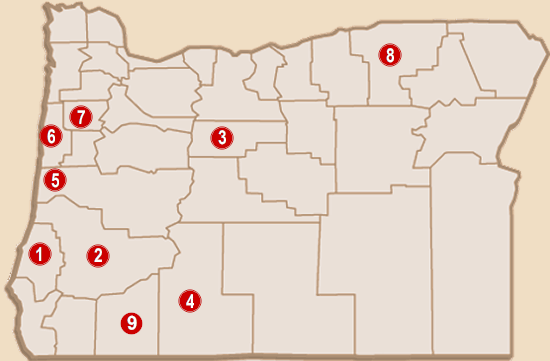 Click For Practice Play
FREE SLOTS • No Signup • Instant Play
Exclusive   Free Play! Select any of these three slot games for exclusive access inside BOVADA CASINO. No player signup is required. No deposit.

A Night with Cleo

Indian casinos in Oregon are reopening with COVID-19 protocols that limit operating hours, crowd sizes, available games and restaurant service. Guest requirements include no smoking, wearing a face mask and passing a temperature check before entry.

The Oregon casinos that reopened in May are listed here by date:

Indian Head Casino in Warm Springs remains closed and is preparing a plan to reopen. An announcement is expected soon.

This month Oregon will become the first state in the Northwest to launch a sports betting app and website for any Oregon resident age 21 or older to bet on professional sports.

Single-game betting, live-game betting and parlays will be accepted. Betting on college sports is banned. Only Oregon residents will have online access. Out-of-state players will be blocked by software.

Oregon's sports betting platform will be operated by the state lottery. It is named the Oregon Lottery Scoreboard (OLS) and will be online before the first game of the NFL regular season Sept 5.

The Ruffey Rancheria is located in central Siskiyou County, California. They are descended from Indian villages from that area. In 1958 Congress removed the tribe's federal recognition. Now they are actively trying to restore their status.

In July last year the "Ruffey Rancheria Restoration Act of 2017" was introduced. House Resolution 3535 was presented by Congressman Doug LaMalfa, R-Richvale, California. The act would return over 440 acres of land back to tribe. It would also restore their federal recognition with the U.S. government.

The bill states that if the approved, the tribe could be allowed to develop a casino on their land.

The exact boundary and location for the proposed tribal land has not yet been determined. However, it could possibly put a casino located in Sothern Oregon if approved.

The city of Ashland is located near the possible location for the tribal land. There is a radius of 25 miles around that land that could obtain casino designation. This has raised concerns for the city and its residents.

So far this year the bill has not progressed.

A letter of concerns of the possible casino could be sent to the federal government on behalf of the city. Rich Rosenthal is the City Councilor for Ashland. He stated that he would like to send a letter if progress is made in the tribal recognition.

Currently the tribe has not contacted the city.

Wildhorse Resort & Casino starts $85M expansion June 20, 2019 - Wildhorse Casino is adding a new, 24-lane bowling center, a food court and a family arcade. This is Phase 1 of a $85M expansion project which will be followed by a new hotel tower and events center in Phase 2. ... Read more

Tribe acquires more land around Medford casino site February 20, 2019 - Over the last few years the Coquille Tribe has been buying additional parcels of land around their proposed casino site. The Tribe now owns or controls about 45 acres. ... Read more

New Parking Garage Added to Chinook Winds December 13, 2019 - A new 380-spaces parking garage has been built on the northwest side of the Chinook Winds Casino Resort. Its grand opening will include a ribbon-cutting ceremony Dec. 13. ... Read more

Kah-Nee-Ta Resort is closing July 8, 2018 - The Confederated Tribes of Warm Springs have announced the permanent closure of their Kah-Nee-Ta Resort after this summer season. The final day is Septemeber 5, 2018. ... Read more

Proposed casino The Grange to be located at Old Racetrack
04.12.2012

Most players - Most visits

Live Dealer Games
Play Blackjack, Baccarat, Roulette or Super 6 with a live dealer. Get either the casino or the bitcoin welcome bonus.

Bitcoin Welcome Bonus - Get more bonus with bitcoins. 150% Bitcoin Casino Match Bonus up to $1,500 redeemable three times plus 50% Bitcoin Match bonus up to $500 on sports.