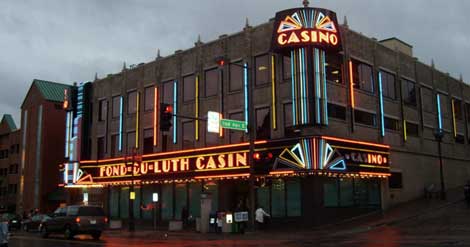 Fond-Du-Luth Casino is an Indian gaming casino located in Duluth, Minnesota. The casino is owned by the Fond du Lac Band of the Lake Superior Chippewa. The tribe also owns Black Bear Casino in Carlton, MN.


Black Bear Shuttle Service departures daily to Black Bear Casino every 2 hours. Subject to change or cancellation at the discretion of the management.

The minimum age to gamble at the Duluth casino has been changed.

The Fond-du-Luth Casino has changed the age to 18. Previously it was 21.

The casino is owned by the Fond du Lac Band of Lake Superior Chippewa. The tribe also owns the Black Bear Casino. The minimum gambling age at the Black Bear Casino has always been 18. The change in the age requirement for the Fond-du-Luth Casino was to help stay consistent with the policies.

Originally the age was set at 21 when the casino begin to sale alcohol to visitors in the gaming area.

The Fond-du-Luth Casino is Duluth's only casino.

Originally, both the tribe and the city worked together on an agreement to build the Fond du Luth casino. In 1994, there was a new agreement made. 19% of the revenues earned from the slot machines would be paid to the city. Yearly this earned the city around $6 million. This money was used by the city to improve roads.

In 2009, the tribe stopped paying the city. The tribe stated that it was illegal for the city to collect the money from the casino. The tribe argued that the agreement went against the federal law. That tribes have the right to have sole proprietary interest of their casino operations.

The city then sued the tribe for the money they felt was owed to them.

The first ruling from the lower court was in favor of the tribe. The city appealed to the federal appeal court. The tribe was again ruled in favor of. Duluth plans on appealing the ruling again.